What Is the Difference Between Peptide and Protein? 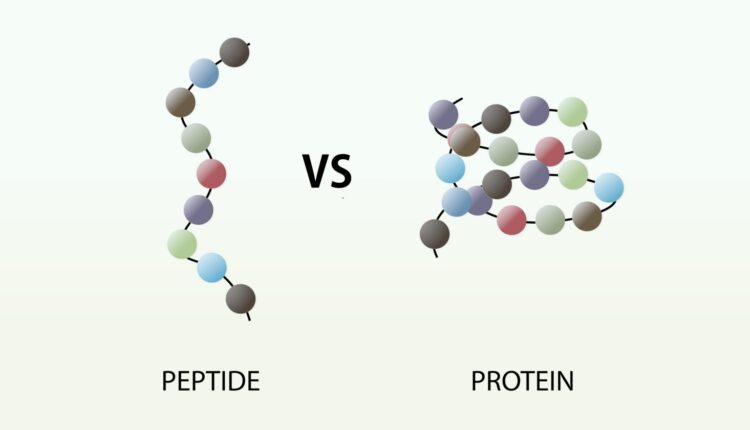 Peptides have been getting a lot of attention in recent years. They’re popular skin care products, and people use them to get better results in the gym. However, peptides also have several other uses, and over 100 prescription medicines have peptides in them. As peptides become more accessible, people naturally want to learn more about them and how they can use them.

Because they’re smaller and lighter, peptides are often used to trigger specific actions or processes in the body. They occur naturally in the body, like eggs, milk, and other animal products. Now, however, researchers make synthetic peptides to mimic the effects of natural peptides.

We’ve gathered some information on what are peptides and how they compare to proteins to help you understand whether they are for you!

As mentioned, peptides are short chains of amino acids. They’ve been in everyday products for decades. One of the most popular peptides is collagen, which has been in skin lotions and creams for years. Collagen increases skin elasticity and prevents wrinkles, which makes it effective for people who want to avoid the physical effects of aging on the skin.

Creatine is another common peptide that athletes use to get better results in the gym. Creatine may facilitate muscle growth and reduce recovery time after intense workouts.

Peptides are usually not as defined as the more complex proteins. Their size of anywhere between two and 50 amino acids means they’re smaller, so there isn’t much room for complexity.

Proteins are more significant compounds made of many more amino acids. Usually, a protein is made of what are called polypeptides, when chains of peptides join together to form a protein.

Proteins give cells their structure and have important responsibilities in the body. For example, they build hair, nails, muscles, and membranes. Hemoglobin is a good example of a protein. It carries essential oxygen throughout the body. Other proteins play crucial roles in the immune system.

There is a lot of research ongoing on how proteins can be used as antibodies to do things like fight cancer or treat arthritis. Proteins are also sometimes used to treat immune disorders.

Peptide bonds link amino acids to form proteins. Additionally, a protein can have several structures that aren’t related to its primary design, and these secondary structures are made of single polypeptide strains.

One good example of a research peptide is BPC 157. It’s a peptide known for its wound healing properties in the GI tract, and it’s also used to heal soft tissue injuries. Researchers are studying its impact on ligament and tendon tears, Crohn’s disease, burns, and other wounds. In addition, the anti-inflammatory properties in BPC 157 may reduce healing time versus other treatments.

In addition, peptides may help facilitate metabolism. For example, animal models have shown some peptides to target fat loss and reduce hunger cravings.

Some peptides increase testosterone production in animals and improve sexual and cognitive performance, especially regarding memory and vision. One of the main benefits of peptides is that they typically are used with very few adverse side effects on the animal models used in tests.

Kids’ Health News You Can Utilize